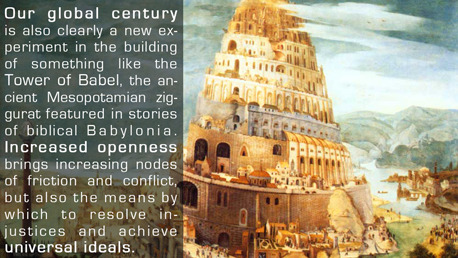 We must, in this age of integration and complexity, work to recognize those areas where we can learn from cultures that build into our own, that enrich or sustain us, that give humanity, broadly, its metaphysical sense, its creative-adaptable quality. We know France as a place of great culture and profound philosophical insights and a highly developed legal system. But we tend not to think of France as a country whose most famous culture is simply one of many that came to dominate, and very really did stamp out the other cultures competing for survival, in a fractious agrarian society outside the capital, in the 19th century.

But France was long a nation of many cultures, and its chosen path to integration under one legal system was to follow a single language, in which all dealings would be done. The legal tradition and the literary and philosophical culture that was formulating and defining the French state were being erected from the material of that one language, to the exclusion of competing indigenous French languages. This created a profound discomfort among the rural French with anything related to the governing system of laws and its attendant judicial system. “Illiteracy” in mainline French was often a barrier to integration of peasant populations into the single official national culture.

The late historian Eugen Weber explained that “Building a French nation was a long struggle pitting the dominant culture of Paris against a people of cultural, linguistic and regional diversity”. Noting that France’s 30-plus indigenous languages continued to thrive even after a solid imperial French state had been established, Weber also said that “Well into the third quarter of the 19th century, much of rural France communicated very nicely in dialects and languages that had little or nothing to do with the classical tongue of Voltaire and Charles de Gaulle.”

As we wrestle with the problems inherent in an increasingly integrated global system of commerce, democracy, learning and development, we face the many temptations related to systemic “ease of use”. It is often more enticing to push for uniformity in order to achieve a relative ease of control for certain segments of a given population than to face up to the fact that meeting the challenges of global interaction, in a way that does not diminish the humanity of some or many, requires means of meeting the communicative needs of all, effectively and with a mind to openness.

It is often the case that a group fighting to achieve majority control, whether it be a political party, an ideological set, a social class working on the levers of power, an ethnic group or a dominant alliance, may view that majority rule as the means to achieving positive goals that would, in theory, be beneficial to all, by creating the conditions for a more just and prosperous society. But, that society would require more freedom for each individual, each group, and each would-be endeavor, in order for justice or prosperity to be expanded, so the singular way is not a democratic enough answer to yield legitimate procedures or optimum results.

By crafting a system that does not privilege one group over another, or that does not define the value of a citizen by his or her cultural heritage, but by a universal prescription of rights and freedoms, democratic societies have privileged the rule of law over prejudice and hierarchy. But they have also participated in some of the ills of those more ancient systems, rooted in strict principles of social prejudice and political and economic hierarchy, because they emerged from those systems, because their cultures retain traces or even major mechanisms of those systems.

A global system of economics, politics, or human development, must recognize the value of all inputs to that system, take a broader, more ecological approach, that will make it possible to integrate calculations about resource-availability, resistance to entropy, and the value of human life, into the mechanisms that allow open societies to implement their strategies for serving the health of humanity and its vital environment.

Systems of influence that devalue real human contributions to the overall fabric of human activity, that degrade languages with less “reach” or regions or states or peoples with less contact with the perceived “centers” of power and influence, degrade and devalue the human individual at all levels, in all regions where those systems operate. The logic of integration is to provide for the possibility that all human beings will enjoy real enhancements of freedom and well-being.

The United States of America is a collection of individual states subscribing to a single central union, based on universal principles of justice. Mexico is also structured this way, as is India. The European Union offers something of a more complicated multicultural, transnational union of states (though its linguistic diversity is far less than some single nations, such as the United States or Indonesia), but follows the same logic, that of the many, there can be one united defense of justice and equality, and so a more effective administration of the rule of law and provision for generalized economic prosperity.

The African Union aspires to this in some ways as well, though it is primarily a loose diplomatic negotiating committee, in some respects, heavily influenced by outside powers and in which the individual governments have near total independence from the union. The Russian Federation is an attempt to keep together a collection of formerly independent sub-states, and in many ways retains a feudal dream of Muscovite empire, while slowly adapting to contemporary democratic structures.

The meaning of these competing strategies for organization is that they tend toward the democratic: they operate on the principle that every entity within the union matters, that the union is stronger for the rights and dignity of its members, and this is the logic of an open society, that organization comes with free choice of the will, of the individual citizen collaborating in ways that are beneficial both to the individual and the society’s goals and ideals.