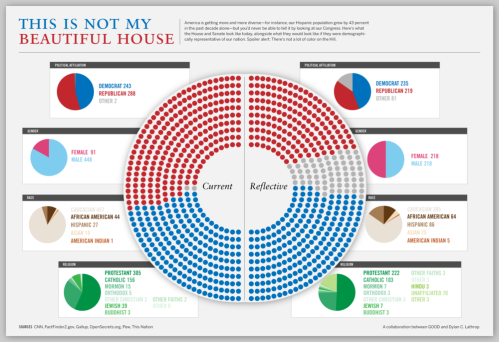 GOOD.is has released this infographic illustrating the significant disparity between the current demographic makeup of the United States Congress (both houses combined) and the actual population of the United States. There is a clear drag on progress in most Americans’ access to Congressional office, and it appears the composition of Congress would shift to the Democratic party, given the current policy platforms and voting tendencies of distinct (and overlapping) demographic groups.

The Republican party’s national political operation has, for this reason, been pushing to reduce access to polling locations for groups that tend not to favor the election of Republican candidates. A more democratic response (lower-case d) would be to find more appealing candidates and policy positions more relevant to a major of today’s American voters.

Independent voters often account for much of this disparity, as the composition of the independent (or non-aligned) electorate shifts significantly from one election to the next, and that shift often coincides with higher or lower turnout within the base of electoral support for one of the two parties.

That connection, and the disparity between actual population breakdown and Congressional representation, suggests independent voters are not exercising full agency or truly independent judgment in terms of their electoral choices. This accounts for the vast disparity between what voters say they think of complicated policies like the Recovery Act or the Affordable Care Act, where most of the specifics are in line with what they want. It also explains how the people of Wisconsin elected an extremist regime that would defy the law, deliberately violate multiple court orders, threaten the use of force to prevent protest and to deny opposition legislators access to the legislative process, and strip Wisconsinites of basic rights.

Every citizen has a responsibility to ensure that we move toward being a nation where democracy is so pervasive that no one is disadvantaged by ethnicity or gender in the project of winning elective office. Independent voters have an important role to play, and can help drive the two major parties toward a more people-centered politics, more reflective of contemporary demographics and contemporary values.