Today, the running theme is citizen engagement. My day began with an online video conference with volunteer leaders in Bangladesh. These are smart, creative citizens, working to build awareness, openness to constructive collaboration, and political will for exemplary climate policy. They face a constant struggle against the cynicism most of us conscientiously teach ourselves to accept.

Working with Citizens Climate Lobby, I see people overcome that cynicism every day. The common refrain is: “People can’t change what’s wrong with the world,” “If it were possible to fix this, someone would have done it by now,” or at the personal level, “I don’t matter; what can I do?” Mobilizing citizens to engage in policy-making almost always requires overcoming such illusions.

By training citizens to empower one another to engage government, and empower public officials to engage in constructive solutions-oriented policy-making, CCL helps to provide a framework for enhanced civil society. Citizens learn, cooperate, engage, and build opportunities for high-value local civics. By working together, they stay engaged, and by relating conscientiously to their elected officials, they make the relationships as such more valuable and more relevant.

Multilateral global institutions are generally treated as the most indirect form of representation: your government, whether you like it or not, participates in a shared negotiation for what is presumed to be the general welfare. What is missing, most of the time, is direct contact with the people affected by policy choices.

Barriers to more direct citizen engagement are often the result of governments demanding control over development initiatives. In theory, that demand is a defense of a people’s sovereignty, but in practice, it is often the opposite: stakeholders are left out, while political actors shift funds to preferred players and projects that impose heavy externalities.

This is precisely what drives the conversation about citizen engagement. Today, at the World Bank Civil Society Forum, one gets the sense that there is no longer real skepticism about the value of citizen engagement, or conferring with stakeholders; the conversation now is about how to achieve the most fruitful, and the most fair, models in each case.

Over the last two years, through a program called Global Voices, Jemma Swan has been bringing Australian Youth Delegates to the World Bank, to meet with the Australian Executive Director to the World Bank, present new research and build ties between citizens and global policy-making bodies. The program does more than train future leaders; it provides an opportunity to witness, in real time, how citizen engagement can be made into a regular part of the policy analysis and decision-making process. 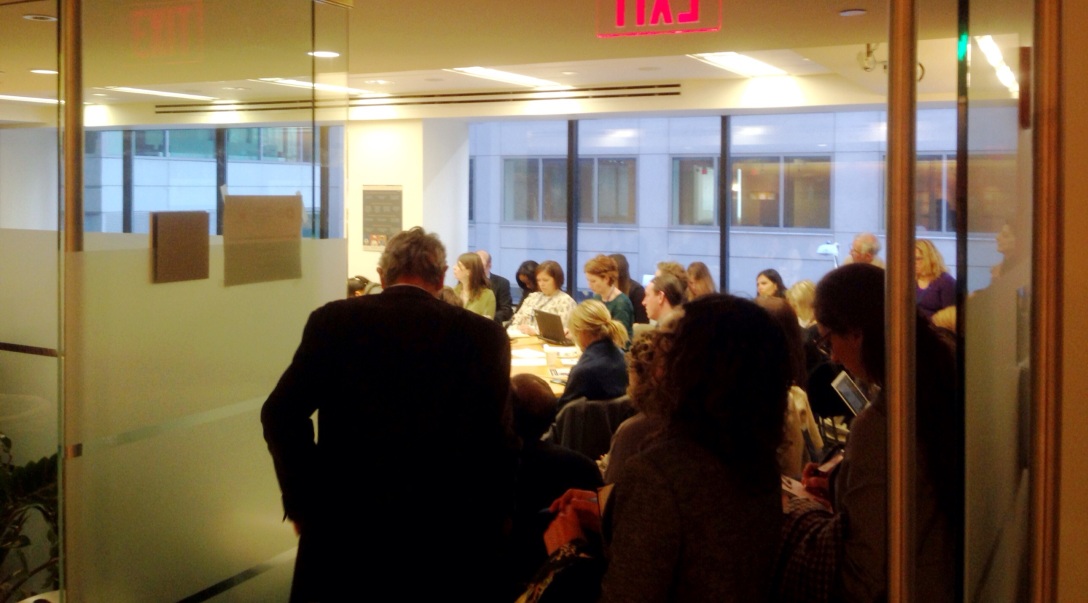 Civil society delegates packed into a seminar to talk about how to build mutual support between citizens and government to reduce corruption, build more effective policies, and more accurately assess and safeguard human rights.

After several sessions today dealing with the question of how to motivate and sustain robust, and useful, citizen engagement with multilateral institutions like the World Bank, it seems we can now set ourselves—as civil society organizations working with multilateral institutions—the task of building platforms to motivate and sustain that engagement.

News anchor Isha Sesay, of CNN International, hosted a panel discussion that included UN Secretary General Ban Ki Moon and World Bank President Jim Yong Kim, as well as transformational leaders and a short film calling for the end of extreme poverty by 2030. The event was, in some ways, the centerpiece of the Spring Meetings, and focused the attention of all in attendance on the goal of serving humanity, by relating to the needs and aspirations of real human beings.

For those of us who came to help steer the Bank toward putting more pressure on governments to mitigate climate change, it was encouraging that Ms. Sesay, the Secretary General and Pres. Kim all reminded the Spring Meetings delegates that we cannot hope to eradicate extreme poverty if we don’t stop destabilizing the Earth’s climate.

In conversation with the sage and inimitable Jim Parks, we discussed the common human need to work through staggering relational complexity to get to the clarity that allows for good outcomes. In a sense, once we agree to look for input from stakeholders, we have to commit to viewing it as useful, and then using it.

Anabel Cruz, of the Partnership for Transparency Fund, said that citizens’ involvement in decisions that affect their lives is “a fundamental right”. Starting from there, she called for recognition that stakeholders should have not only a right to comment but a right to assent—to approve a project that will affect them, before it goes forward.

Citizen engagement should be the rule.

Everyone knows this, but not everyone trusts the insight: How can we administer such a system? What about corruption? Many governments will not allow it? Is it really the place of a global institution to get between people and their governments? Would we be more efficient if we just focus on lending practices? How can we know what is happening “on the ground”?

All of these objections summon the same retort: ask people what they are experiencing, an ask people what they need. Involve people in decisions that will affect their future conditions; bringing stakeholders into a principled decision-making process empowers them, builds civil society, and reduces opportunities for shenanigans by corrupt officials.