by Joseph Robertson
Published in The Guardian on April 25, 2016

Would it surprise you to learn that governments, oil companies, NGOs and major investors are coming together to map—and to motivate—the decarbonization of the global economy?

The Carbon Pricing Leadership Coalition (CPLC) is a policy-focused alliance of national and subnational governments, intergovernmental agencies, businesses and institutional investors, nonprofits and stakeholder networks. It was launched on the first day of the Paris climate negotiations, and its mission is simple: to collaborate across borders, across sectors, sharing information, know-how and capacity, to build the most economically efficient tools for decarbonization into every nation’s climate plan as soon as possible. 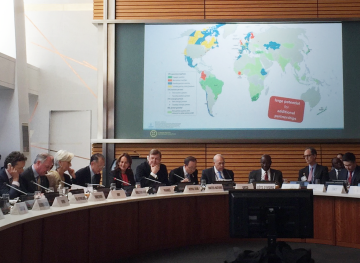 The Paris Agreement calls for non-state support for national climate action. The 17th Sustainable Development Goal is devoted to partnerships that build capacity and speed implementation. At the CPLC table, all of the partners are peers, and this takes the project well beyond the the conventions of global governance: honest and capable support for success is the shared focus, so governments and leading businesses work with intellectuals and policy advocates, to ensure no good thinking is left off the menu.

Asked why he sees this multi-sectoral collaboration as so crucial to success in combating climate change, World Bank President Jim Yong Kim said “Putting a price on carbon pollution will cut emissions, improve people’s health, and spur new investments in clean technology,” adding that success “will have a clear impact on our efforts to end extreme poverty in the world in 15 years.”

When Ethiopia’s Prime Minister Hailemariam Dessalegn joined the Carbon Pricing Panel last fall, he said his nation wanted to ensure it followed the most cost-effective route to leadership in the 21st century clean economy. Last week, he said he aims “to build a climate-resilient green middle-income economy.” Ethiopia will also produce “recommendations on the role and possible forms of carbon pricing policies in Ethiopia, which might also be applicable to similar low-income developing countries.”

Read the full article on the Guardian website:
http://www.theguardian.com/environment/climate-consensus-97-per-cent/2016/apr/25/a-global-coalition-mapping-and-motivating-decarbonization