Throughout the 21st century, cities are likely to be more and more the engines of design that determine how we live and whether our way of making a living in the world is sustainable. Every society everywhere grapples with questions of how much decision-making authority should be concentrated in how many hands, but we know that we are most empowered to make a difference at the human scale, where we live and breathe.

The great challenge of our time seems to be: how can we do that, when so much of what we do depends on national and global traffic—of goods and services, but also of ideas and influence? Citizens’ Climate Lobby exists to answer that question. We have a dual mission aimed at maximizing the power of individuals and small groups of citizens to make a difference in the design of their climate future:

Political leaders don’t create political will; they respond to it. The degree to which they are empowered with the best information about what their constituents need, or hope for, is largely determined by how those constituents interact with them.

I have learned from my work with CCL that most public servants are hungry for substantive, respectful, working relationships with the people they represent. Without that substantive, respectful contact, oriented toward doing good work, they can be left guessing, with only abstract information to light the way, what people most need or could leverage to make a better life. 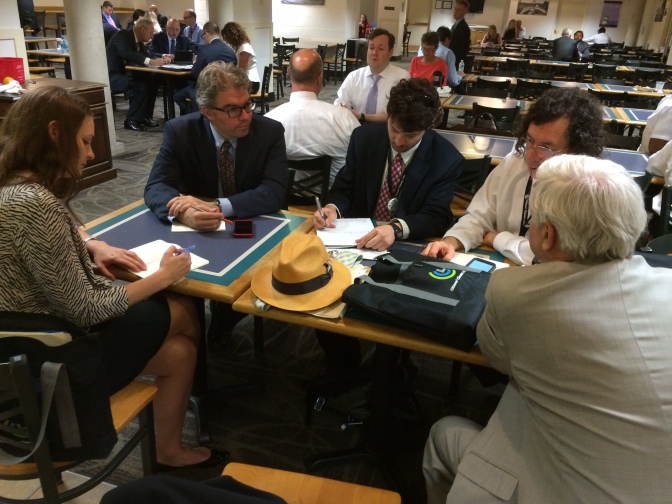 CCL volunteers organize into local volunteer teams, train to master information about legislative process, climate economics, and people-friendly carbon pricing that can drive investment to Main Street and build the middle class. Most of all, they prepare to listen. Instead of back-room deals and prime-time mud-slinging, they work to build honest relationships with lawmakers they hope will succeed.

The advocacy is person-to-person and rooted in good-faith relationships.

The effort can be global, the solution can be national or international, but the project of getting there operates at the human scale. Likewise, CCL’s core legislative proposal is aimed at generating sustained and expanding economic value at the human scale, so the wider political commitment can be more stable and ambitious.

A simple fee on carbon emissions, assessed at the mine, well, or port, starting low and steadily rising by $10 per ton per year, with 100% of revenues returned equally to all households, can cut emissions by half in 20 years, while adding 2.8 million jobs and expanding incomes. Climate policy can and should reinforce the core values that expand economic opportunity where we live and breathe.

In 10 years, CCL has grown from one local chapter with 29 people to more than 65,000 members spread over 6 continents.

The Citizens’ Climate Engagement Network was launched during the Minneapolis 2015 conference and activated during the COP21 climate conference in Paris, to ensure people around the world would have a coordinated way to expand the civic space for citizen leadership in climate policy. It is supported by a coalition that believes in citizen engagement at all levels as a way of improving policy design and real-world outcomes.

If you’re looking to host a local conversation about climate from your own perspective, or want to bring local leaders and stakeholders into conversation with the international policy process, you can find a toolkit for local meetings at engage4climate.org/host

To find your local CCL chapter, join CCL at citizensclimatelobby.org