The world’s wealthiest 42 individuals now hold as much wealth as the poorest 3.7 billion. This corrosive market failure is driving a perversion of the whole economic landscape, where capital feeds capital, without necessarily providing what makes healthy societies, which should be the basis for market success. With extreme wealth abstracted at this level from human wellbeing, all of the underpinnings of reliable value, including stable nation states as such, are imperiled.

An open Main Street economy, where work is rewarded, enterprise is honorable, banking supports investment in real-world good for living human beings, and politics doesn’t decide who gets rich, requires deep, informed, ongoing democratic engagement. When we talk about jobs, taxes, energy, innovation, infrastructure, and education, we need to remember that we are mapping out the future of human wellbeing.

Jobs don’t come into existence because someone with money decides they should. They come into existence, because there is a need for someone to do the work, and the work is needed, because people, communities, the life of society at the human scale have a need that is addressed by the work in question. Entrepreneurs can build new markets for new work, by innovating in ways that drive people to want new goods and services, but job creation requires a connection to lived experience.

Such a healthy, thriving middle-class Main Street economy depends on shared standards of honor and a level playing field, on which:

Negative external impacts from badly designed or deliberately deceitful economic arrangements harm third parties, with no penalty for those responsible. Sometimes, the legal system provides redress. Sometimes, intensity of competition favors those who don’t generate such harm. In the case of carbon fuels and climate change, every person now and for generations is negatively impacted, and we have not yet put the brakes on the underlying unfairness and/or deceit.

Such unnecessary, unpaid-for harm, undermines legitimacy. Those who most directly benefit from such an unfair arrangement find themselves invested in special circumstances that protect their interest against the interest of everyone else. Income inequality tempts political institutions to protect the established order by protecting those who have more power over it.

The crash of 2007-2008 was a slow unraveling that built up to a point of crisis, and the unraveling began when financial fiction was built into speculative investment. In other words, future thinking about value was detached from any requirement that value be created for people who live in the world. Many trillions of dollars in presumed potential profits from financial speculation were never real, never feasible, and out of touch with the trends in the underlying economy.

Not enough people had enough wealth to sustain the boom.

It’s a common-sense problem: If most people are watching real income decline while costs rise, there will be too little disposable cash to fund a vibrant middle class economy where hard work and entrepreneurship are rewarded. The resulting downward spiral will squeeze incomes still further, and capital will retreat to non-labor assets. The trend where capital share of income expands beyond what is sustainable, if unchecked, puts unbearable stress on the whole economy.

Seven times the amount needed to end extreme poverty globally went to the wealthiest billionaires, in 2017 alone. Eight people now hold as much wealth as half the world’s population. This is not healthy. Capital should increase where it adds value and economic empowerment for the most people, not because policies are designed to push all income gains toward the wealthiest few.

The United States finds itself in a precarious position:

The relationship between the financial sector and the living everyday economy is not so healthy and resilient as to manage these pressures optimally.

Despite years of steady stock price gains, these institutional, arithmetical, and structural pressures, risk a significant correction in the first quarter of 2018.

The correction could be a blip of one or two days, or a prolonged malaise with uncertain causes. But pressures rippling out from the mounting imbalance will likely moderate long-running gains.

One of the unifying experiences of our time is the problem of needing to correct these structural risks, while lacking a shared strategy for doing so. Ultimately, anyone building livable value will prosper more readily and more reliably in an economic landscape that is more structurally fair. Income fairness is what accounts for the magic of optimal market-driven allocation of wealth: with everyone able to play a part, the balancing out of human talent, intelligence, good will, and enterprise can maximize good outcomes for more people.

Looking back at “Economics for Real People“:

Economics is transactional human ecology; resources, systems, intentions and collaborations, work together or against each other to build or erode a base of sustainable thriving.

Structural math says we need to refocus serious investment decision-making on that fundamental truth and remember: real and generalized empowerment of people works.

On Monday, February 5, 2018, the Dow Jones Industrial Average lost 1,175 points in its worst-ever single decline. The total losses over two days were more than 1,800 points. Uncertainty about global economic trends and policies that could undermine fundamentals in the American economy, including the sustainability of major gains in real estate and finance—structural inconsistencies—seem to be driving the sell-off.

Amid deep uncertainty about the health of the structural policy environment and deteriorating international cooperation, and confronting inflationary pressures, with real wages declining, all major stock-tracking indices are continuing to lose ground.

The Dow Jones industrial average tipped more than 500 points into the red, down around 2 percent during the late morning as fears deepened over rising interest rates. The technology-laden Nasdaq and the broad Standard & Poor’s 500-stock index also drifted lower in early trading, the seventh down day in the past nine for the S&P 500. The three major indexes are down about 3.5 percent this week. And the 2018 gains for the Dow and S&P have been wiped out.

This story was later updated to read:

The Dow tipped 1,032 points into the red, down 4.2 percent, to close at 23,860 as fears deepened over rising interest rates. Its steep dive in the final minutes of trading put it in a correction — or 10.4 percent below its all-time high on Jan. 26. The technology-laden Nasdaq and the broad Standard & Poor’s 500-stock index also tripped lower throughout the day’s trading — and each ended with a loss of nearly 4 percent. Trading volumes were 50 percent above normal. The 3-plus percent pullbacks Thursday across U.S. indexes is something that did not happen in all of 2017. And the 2018 gains for the Dow and S&P have been wiped out.

A note on the structural math

Given that we are hearing concerns about rising interest rates, or reporting that says “rising wages” are causing investors to seek shelter, three macro-critical factors — drivers of value that shape the overall size, scope and direction of the macro-economy — deserve some attention:

What these three macro-critical factors tell us is that this now official correction is a market-driven demand for the de-fictionalization of financial gain. We need more direct investment in people, places, processes, and planetary systems.

Today, the Dow Jones Industrial Average (DJIA) declined by 724 points — the 5th worst total point decline in history. The DJIA is now down overall for the year, despite bouts of upward movement and massive new corporate tax cuts intended to build confidence and fuel new investment. The S&P 500 is also down for the year. The 2018 Q1 correction against structural distortion is still ongoing.

Structural risks are becoming more problematic, as leaders in the financing of industrial output struggle to deal with new policies that threaten a global trade war and the breakdown of decades of progress toward macro-economic integration.

The fraudulent acquisition and subsequent weaponization of data from 50 million users, touching 57 billion Facebook “friend” pairs — which Facebook’s CEO Mark Zuckerberg has described as a clear “breach of trust” — has resulted in a major segment of the digital economy coming into question. The problem is bigger than Facebook, because nearly every social media user wants services that don’t sell their data, and Facebook is just one of many networks that share or sell user data without case by case consent from users.

What Facebook’s troubles tell us about this economic moment is very much like what the 2008 bundled-subprime mortgage crisis or this February’s week of stock plunges tell us:

We need to re-align the levers of value-creation across the economy, and start by putting human interest ahead of what feels convenient to those who manage over-concentrated wealth.

In an unusual, unexpected, and bewildering press release, U.S. Treasury Secretary Steve Mnuchin announced on Christmas Eve that he has made phone calls to the “CEOs of the nation’s six largest banks” and that they have “confirmed ample liquidity is available for lending to consumer and business markets.” 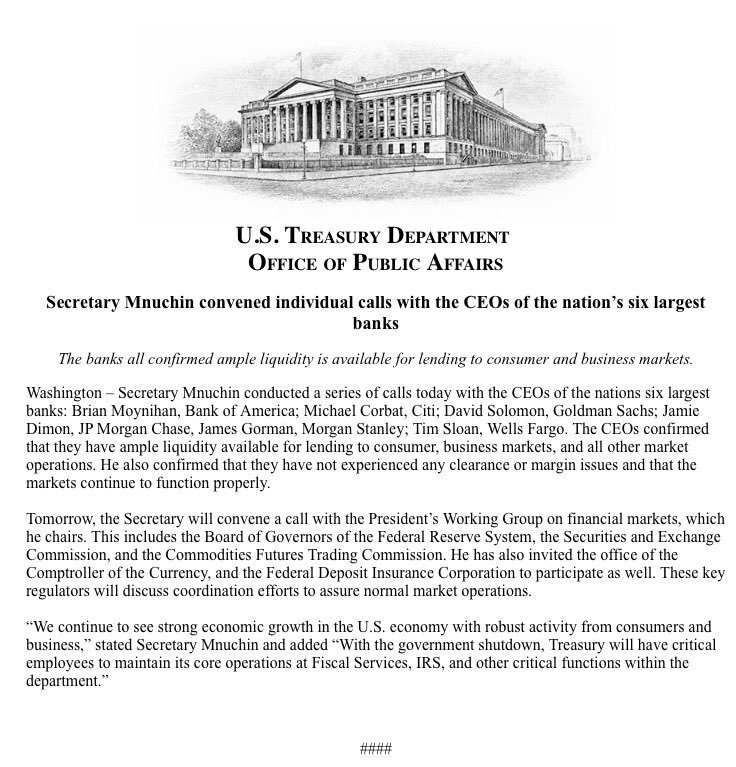 While the release appears to be designed to ease concerns, it has done the opposite, as the issue of major banks’ liquidity had not been widely reported as a concern. There are serious concerns about the state of financial markets, as 2018 has been a baffling year for investors as 8 major asset classes have all struggled to make or hold gains. 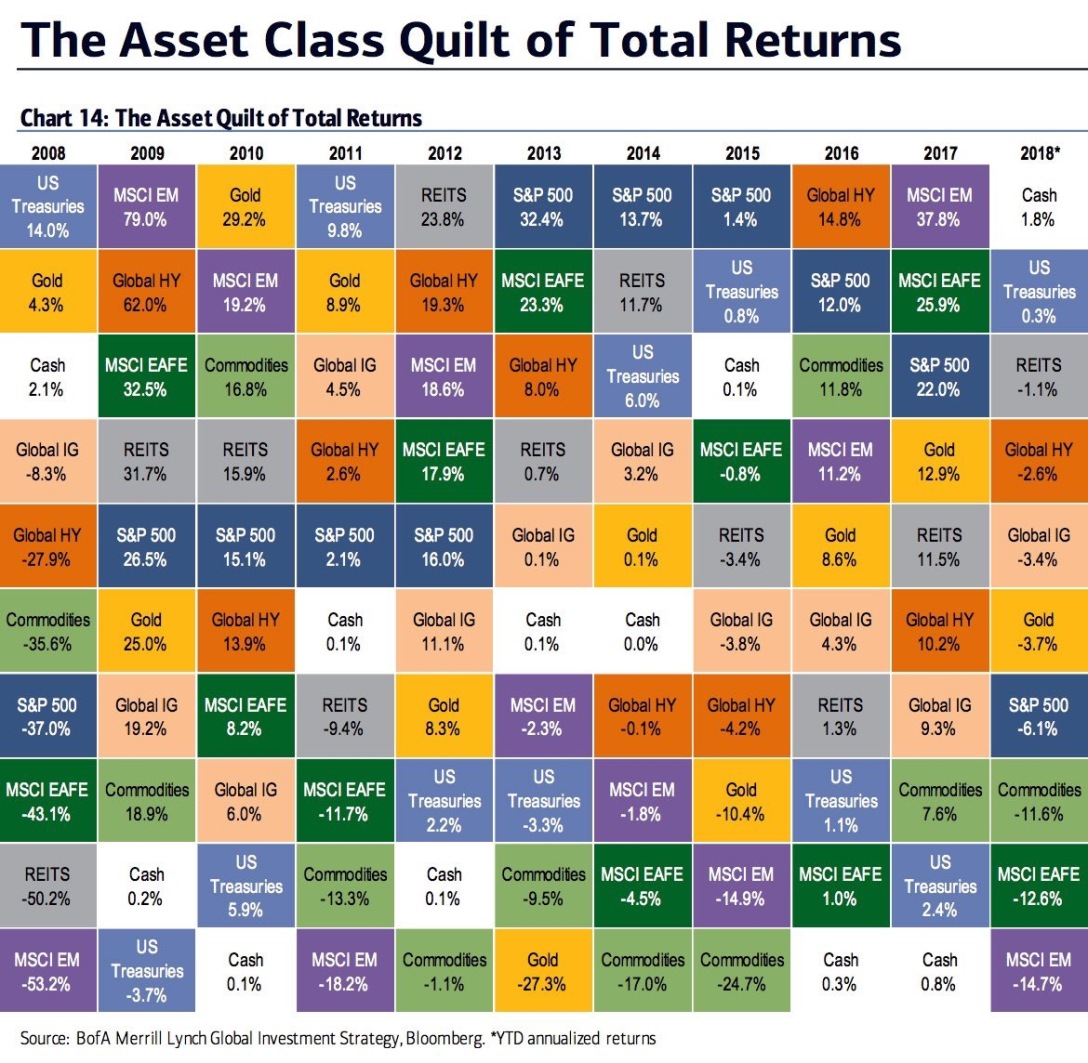 This “quilt” graphic shows 8 of 10 major asset classes down for 2018. CNBC went on to report (under the quilt graphic) that:

It’s not just that nothing’s working, investors are also for the first time in a long time losing a lot of money . The Russell 2000 and the Nasdaq Composite both dipped into bear market territory this week.

Axios is reporting today that 2019 could be the worst year for the US economy broadly since 2008, when the subprime mortgage bubble burst and the financial system went into near collapse.

The correction could be a blip of one or two days, or a prolonged malaise with uncertain causes. But pressures rippling out from the mounting imbalance will likely moderate long-running gains.

If the US is facing a liquidity crisis (or credit crunch), it will be strictly because too many of the structural, fiscal, and direct incentives driving financial decision-making skew toward industries that are over-dependent on easy capital and externalization of cost and risk. By contrast, Main Street businesses are a lower priority for lenders and are routinely forced to carry most of their own cost and risk.

We need new market signals that redirect investment toward more efficient ways of providing value to the general marketplace, so smaller value, more distributed and local actors that carry their cost and risk are empowered to drive expansion of incomes and local economies.