As the “perfect storm” gathers from inchoate, deceptively non-threatening winds, we can look ahead, backward and into the mirror and ask how crisis comes, or why, if it is inevitable, if we might just fall right out of it, as we fell into it. But the answer is simple: human crisis comes from excess, from … END_OF_DOCUMENT_TOKEN_TO_BE_REPLACED

ThoughtPossible.com :: The media are ablaze with speculation about whether President-elect Obama will be able to “control the Clintons”, whether his stature is so monumental and secure, after an admittedly meteoric rise, that the vanquished senator from New York will devotedly voice his foreign policy and look good doing it, whether the White House will be infiltrated by “re-treads” from the Clinton years, whether the socialist bailouts of George W. Bush’s own red October are enough to give Obama a pass on the anti-supply-side dictates of a potentially necessary “new New Deal”.

We hear at a constant clip the talk of “Clintonistas” coming “back to power”, of “Bushies” and “Busheviks” leaving a scorched earth behind them in Washington, with the entire potential for cross-party negotiation having to be restructured from scratch, of “Obamaphiles” calling down prophetic hopes from a blue sky vision of national renaissance, a 21st century reshaping of the messianic strain of Western thought. We are asked to believe that major policy initiatives are as easy to formulate or predict as a seating chart, as judged by résumés, for the first Obama cabinet meeting.

END_OF_DOCUMENT_TOKEN_TO_BE_REPLACED 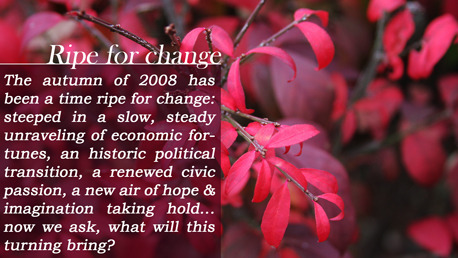 A “wave election”, with public sentiment clearly moving in a new direction, calling for principled governance, with a new focus on progressive aims… economic crisis, having built up over a decade, hidden in the esoteric workings of financial instruments reliant on advanced physics for mathematical proof of viability, worsened by unprincipled exaggerations and manipulations… the potential for a major swing in global opinions about the meaning of political systems… the climate is ripe for change, and we now face the problem of conceptualizing change, in order to see and understand its implementation.

END_OF_DOCUMENT_TOKEN_TO_BE_REPLACED

Sen. Barack Obama, as president-elect, now faces the daunting task of staging a transition from campaign to governing, and from the Bush years to the Obama years, in what must be the most artful and adroit performance of the task seen in decades. Facing two wars, looming multifaceted economic crisis, and the need to overhaul national energy policy and fight environmental degradation on an unprecedented scale, Obama is faced not just with forming a cabinet and White House team, but formulating a strategy for enacting the change he has promised in a time of historic difficulty.

Reversing a perfect storm of crisis, deficit and discontent is the tall task that from day one threatens to distract Sen. Obama from his ambitious policy proposals to effect change across the board and restore institutional efficiency and fairness in American government. He will have to fashion solutions for a time of economic upheaval, real security problems relating to at least two wars, a policy approach to what appear to be Chinese and Russian expansionist ambitions, and do so within the context of his own policy proposals and campaign promises.

END_OF_DOCUMENT_TOKEN_TO_BE_REPLACED

Renewal is the keyword for this election. Change is the bridge that will take us to the place of renewal, but the intent behind the change message, must be renewal. It is vital to examine the candidates’ proposals for the direction of our nation, in this light. Who can best harness what is best in the American system of laws and in the landscape of American values, to effect an historic renewal of faith in our institutions and of commitment to civic responsibility and prosperity and dynamism in our society, generally?

Barack Obama, the senator from Illinois, is the candidate that is best positioned to offer this solution to our nation, in these troubled and challenging times. His positive vision of a dynamic American society, capable of innovating to combat a global energy crisis, principled in defending Constitutional law and human rights, combines the open and dynamic nature of American democratic culture with an energetic commitment to tackling new challenges, motivating a resurgence of the kind of major projects that will help rebuild and spur our economy.

The distinction between the two candidates’ visions, in this respect, has become even more evident due to the destructive and hollow campaign tactics adopted by Sen. McCain and his party. In a vicious attempt to smear Sen. Obama with some vague responsibility for the actions of individuals over whom he holds no actual responsibility and whose views he has denounced, the campaign of Sen. John McCain has sought to poison the electoral process, distract the minds of voters, and obscure what appears to be an inability to compete in the realm of ideas.

That sort of campaign of distraction is destructive to the healthy functioning of democracy and ignores the basic right of the electorate to govern its elected officials with the advantage of reliable information, firmly in hand. Fudging the truth for political gain can lead to ill-conceived policies that undermine the wellbeing of the nation (the 2003 WMD policy debacle, and ensuing war, are just one example).

Sen. Obama’s approach to domestic and foreign policy is consistently principled and pragmatist, rooted in an understanding of our system of laws, its founding ideals and the nature of our liberties. His policies hint at an underlying philosophy that seeks to do what is necessary to achieve the highest goals of our practical ambition, yet always uphold that essential allegiance to the “better angels of our nature”, work together with those whose collaboration we need and be firm about the rule of law and the fundamentals that give us a moral high-ground in dealing with the broader world.