…to the oil companies. 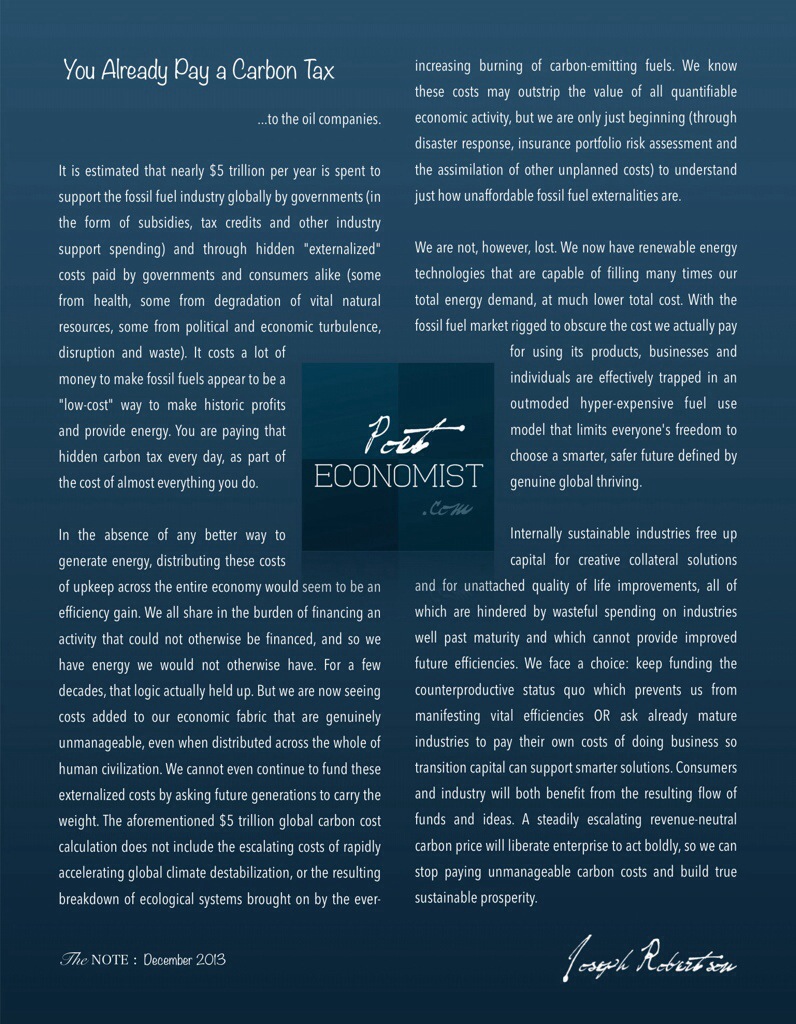 It is estimated that nearly $5 trillion per year is spent to support the fossil fuel industry globally by governments (in the form of subsidies, tax credits and other industry support spending) and through hidden “externalized” costs paid by governments and consumers alike (some from health, some from degradation of vital natural resources, some from political and economic turbulence, disruption and waste). It costs a lot of money to make fossil fuels appear to be a “low-cost” way to make historic profits and provide energy. You are paying that hidden carbon tax every day, as part of the cost of almost everything you do.

END_OF_DOCUMENT_TOKEN_TO_BE_REPLACED 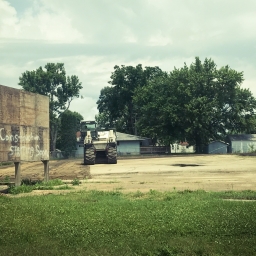 First printed in The Times of Trenton, as a guest opinion column, on December 01, 2013

For a long time, fossil fuels have been a smart investment. There is unparalleled infrastructural, political and tax policy support for those investments, and so there is a lot of money to be made. But all markets have nuance, and plenty of people lose money gambling on fossil fuel interests. That has always been true. Now, we face a new kind of crisis in pricing certainty: fossil fuel companies have invested far too much in future production that will not have as high a market value as they would like.

The Fifth Assessment Report of the Intergovernmental Panel on Climate Change reveals that we have a global lifetime carbon fuel budget of 1 trillion metric tons of carbon dioxide emitted into the atmosphere since the beginning of the industrial revolution. Any burning of fossil fuels beyond that will bring on unmanageable destabilization of global climate patterns. The cost to government, society and enterprise of dealing with that level of change to the worldwide underpinnings of all our economic activity will be too great to bear.

END_OF_DOCUMENT_TOKEN_TO_BE_REPLACED

The Intergovernmental Panel on Climate Change (IPCC) found, in its 5th Assessment Report (AR5), which was released in September, that the worldwide human community has a global lifetime budget of “burnable” carbon-based fuels. Beyond that, any further burning of carbon-emitting fuels would push global average temperatures more than 2°C higher than the historic norm, unleashing unmanageable climate destabilization. So, though existing reserves might allow us to use far more than the scientifically measured carbon fuel budget, those resources are in effect “unburnable”.

This is not a matter for ideologically driven debate. This is a question of hard numbers. A 2°C rise is the tipping point, beyond which it is projected climate destabilization will be irreversible, with complex feedback loops exacerbating the situation more and more. Beyond a certain point, probably well before we reach the full 2°C rise, the actual cost of adapting to significant destabilization of historically consistent climate patterns will exceed our ability to spend to respond.