The First Amendment to the Constitution of the United States protects the freedom of the press, because without solid evidence-based knowledge of fact, no human mind is sovereign, and democracy cannot exist.

The right to criticize the manner in which powerful individuals and institutions exercise the power granted to them is the right to live free of political oppression.

Writing in the The Kansas City Star on May 7, 1918, former President Theodore Roosevelt defended the inherent patriotism of citizens and media questioning the actions of the President:

The President is merely the most important among a large number of public servants. He should be supported or opposed exactly to the degree which is warranted by his good conduct or bad conduct, his efficiency or inefficiency in rendering loyal, able, and disinterested service to the Nation as a whole.

To announce that there must be no criticism of the President, or that we are to stand by the President, right or wrong, is not only unpatriotic and servile, but is morally treasonable to the American public. Nothing but the truth should be spoken about him or any one else. But it is even more important to tell the truth, pleasant or unpleasant, about him than about any one else.

No President can earn or keep legitimacy while seeking to silence or punish those who ask necessary questions or criticize questionable behavior. In our Constitutional system, it is fundamentally illegitimate for a President to question the right of others to question him, and it is purely and undeniably unlawful to use the powers of the Presidency to punish dissent. 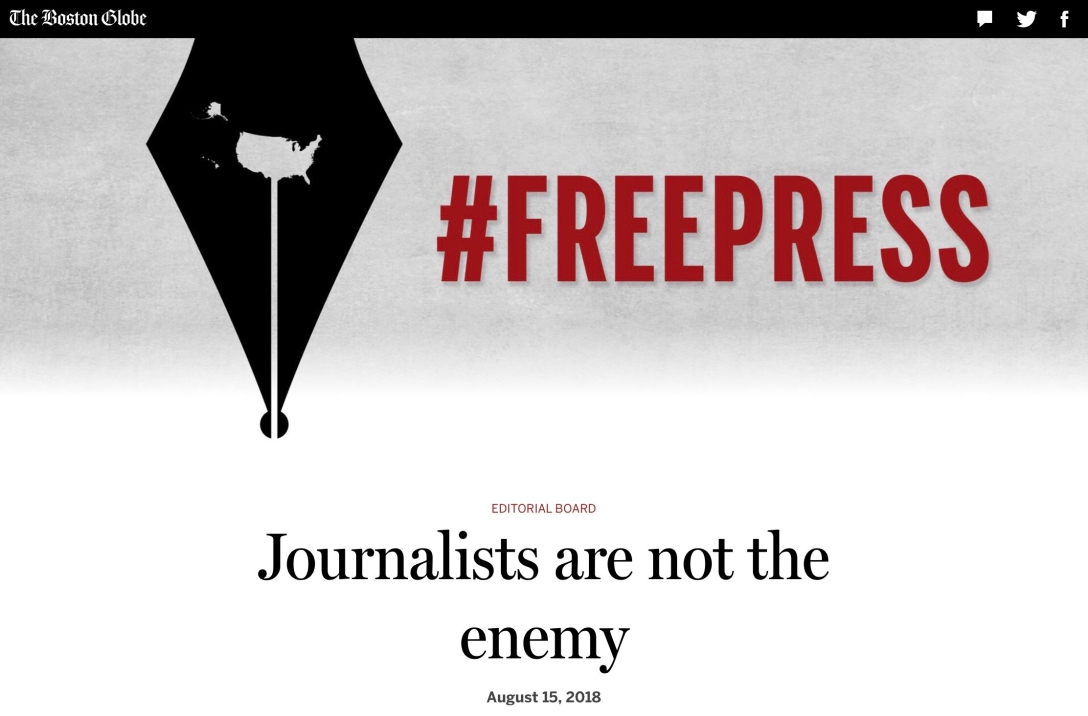 Last week, hundreds of newspapers across the United States ran editorials in defense of the salient role of the Free Press in defending personal freedom and republican democracy, which requires aggressive checks and balances against the misuse of power. This campaign of solidarity among journalists is not an insignificant development in the sweep of history.

Federal officials swear an oath to uphold and defend the Constitution of the United States; where they fail to do so, they are operating outside the law. The sitting President of the United States has made clear his intention to attack, harass, impugn, and punish those who criticize his misuse of office.

In response to this, and to the nation’s newspaper editorial boards, the United States Senate unanimously passed a resolution pledging to uphold and defend freedom of the press. This should chasten the President and encourage the American people. Both the Supreme Court and the United States Senate have now made clear they will not stand for an unaccountable executive, and they will not recognize unreviewable powers or the right to punish dissent.

After the President took the openly punitive action of stripping a former CIA director of his security clearance, citing as one of his reasons his displeasure with the investigation into Russian interference in the 2016 election, dozens of the nation’s most senior retired intelligence officials have condemned the President and called for solidarity among public servants. On Sunday, the President’s lawyer yelled at the anchor of NBC’s Meet the Press that “Truth isn’t truth!”

Today, we learned that Russian hackers are now targeting Republican institutions that criticize the US President or Kremlin abuses of power. Retired intelligence officials say there is a clear, and escalating, effort by Russian spy agencies to circumvent, pre-empt, punish, and stamp out dissent in the United States.

The United States is facing an open assault on the sanctity of the right to know and deal in truth.

Only with the unfettered right to be part of an informed electorate, empowered by all of the instruments of democracy, including a 100% free and independent press, can any of us claim to be free. Political oppression operates through the destruction of truth.

Demand in every moment, in every interaction, that everyone who serves in public office, adhere to the sanctity of the right to know and deal in truth, without exception. Everything depends on it.